By doug on December 30, 2014Comments Off on Delcam lifts the curtain on its enhanced modelling and reverse-engineering capability for 2015

“Designers are great at designing; that’s what they do. Unfortunately what they design is often not capable of being manufactured.”

The latest version of PowerSHAPE Pro – including improvements in direct modelling, surface modelling and reverse-engineering, along with support for data from Creaform HandySCAN handheld scanners – received a rapturous reception form SE- Asia and Australasia’s leading manufacturers and designers at a symposium held in South Korea recently.

Delcam’s Senior Applications Engineer, Charlie Jones, led off, to the delight of many, with his comment: “Designers are great at designing; that’s what they do. Unfortunately what they design is often not capable of being manufactured.” Once the comments which flew around the assembly had settled, he launched into the enhancements of one of Delcam’s almost- legendary software tools, PowerSHAPE, and its significant enhancements this coming year.

A number of these improvements are built on top of the recently introduced Smart Feature Manager (SFM) and the Smart Feature Selector (SFS). SFM allows users to identify all the feature, such as fillets, slots, bosses and others, within a solid, in a single operation, so making the analysis of the imported data, that much easier and faster. The SFS then allows multiple similar features to be found and selected, using either a specific value or a range of values.

Once the particular group has been selected, all the features can be edited, simultaneously, e.g. all holes with a diameter of 5mm can have their diameter increased to 10mm – in one operation.

“This new functionality,” says Jones, “will speed the preparation of models for manufacturing significantly, e.g. a very common problem in product designs, to be moulded or cast, is fillet sizes being set so small, they restrict the flow of material. The SFS can be used to identify those fillets below the required radius, and then boost those to the desired minimum size, simultaneously.” 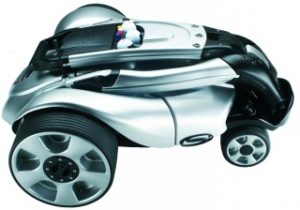 He went on to highlight another potential application, for tidying-up models created by reverse engineering, where features intended to be identical – such as a series of holes – will often show small variations.
“Again, all the items within a specified tolerance band can be selected and then all adjusted together to be the same, precise size.”

One of the acclaimed strengths of PowerSHAPE Pro has always been its surface modelling capability, literally giving the user the “ability to create any shape they can imagine”.

This strong suit has been further improved with the addition of new, dynamic point-editing capabilities.
“Multiple points, either along a single curve, or picked from multiple curves, can now be selected and moved – with real-time updating of the model – making styling of free-form shapes easier and quicker,” Jones says. “It also speeds up modelling-for-manufacture tasks, such as removing undercuts from tooling designs.”

A further PowerSHAPE Pro area of strength made faster and easier is the ability to morph a complete model into a new shape.

Jones again: “One key application for this option is in compensating for spring-back in press tools or ‘warpage’ in moulded products. The user can alter CAD directly, based on scan data from a sample part, collected as a point cloud or as a triangle mesh. That gives you the choice between either updating the CAD model of the part, to match the as-produced item or adjusting the tooling design, so that it produces parts matching the original CAD data.”

Morphing also allows the updating of parts which need to be repaired, but have changed shape during usage. A typical example of this is turbine blades which have been distorted by heat so that their shape no longer equates the CAD data used to manufacture them originally.

Again, the original CAD data can be adjusted to match scan data captured from the actual part.

“The major enhancement to PowerSHAPE Pro’s reverse-engineering functionality is a more automated method for capturing cross-sections through a mesh. The software now fits lines and fillets to the cross-section, where it can with the user able to control the tolerance used.

“This method uses the mesh as a guide, instead of treating it as exact geometry, with the priority of capturing the design intent, rather than ensuring a precise fit to the scan data.”

Being held in South Korea, drawing in innovators and many household brand names in the electronics’ field both at home and in the greater SE-Asia region, electrode design along with tool design drew a good deal of interest, along with the massive growing market for shoe design.

Jones concluded his presentation and question session by highlighting the aspects in which Delcam enjoyed what he described as “a USP advantage over the competitive offerings available”:

Delcam lifts the curtain on its enhanced modelling and reverse-engineering capability for 2015 added by doug on December 30, 2014
View all posts by doug →