By doug on March 22, 2019Comments Off on Point Pod latest start-up success story

"I developed Point Pod two years ago out of my own frustration of the limited power options available,” says Mr Singer.

A new innovative product that solves your household power problems has teamed up with Australia and New Zealand’s large distributor just six months after making its market debut.

Point Pod finally solves the problem of not having enough power outlets in your kitchen by hiding a pop-up unit beneath your stone or timber bench top.

Brisbane builder-turned-entrepreneur, Cameron Singer, developed Point Pod after being frustrated with the limited options on the market.

“I developed Point Pod two years ago out of my own frustration of the limited power options available,” says Mr Singer. “After renovating my own house, I was disappointed with what was available to improve access to power for my island bench. There were products online, but they looked so cheap and flimsy in a kitchen we’d spent a lot of money renovating.”

With a simple touch, Point Pod’s power points and USB sockets emerge for use. But unlike other power options, it blends seamlessly into your bench top, so it doesn’t comprise your aesthetics. The units are designed for any space where you would use power on a bench top, including the kitchen, bathroom, office and boardroom. 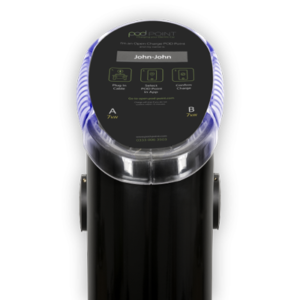 After launching in August 2018, Point Pod has today announced its new partnership with Häfele, Australia and New Zealand’s biggest distributor.

“I’m excited for Point Pod’s next phase, working alongside Häfele,” Mr Singer says. “Häfele’s commitment to innovation made them the number choice for our distribution partner.”

“Häfele brings new innovative products to the market so their customers are always on the cutting edge of what’s available, and we’re excited to be part of it.”

“Our distribution agreement gives us access to a larger chunk of the market, but it also means we can focus on manufacturing and developing further products.”

Mr Singer says he’s been overwhelmed by the industry’s positive response while showcasing his product at trade shows over the last six months.

“I knew there was a need for a product like Point Pod, but it’s become clear that it’s something people have been looking for.”

“I believe so much in this product, that I’ve decided to give up my building business to fully pursue bringing this to the market. It’s taken me two years to get it ready, and now it’s exciting to be taking it to the next level.”

Point Pod is waterproof and robust and meets all Australian Standards as well as stringent in-house testing.