Northland lifestyle a big plus

By doug on July 2, 2019Comments Off on Northland lifestyle a big plus

Regional development is a phrase that’s getting plenty of airtime these days, especially with Government’s Provincial Growth Fund (PGF) promising to pump billions of dollars into forgotten corners of New Zealand.

Take Northland, for example:  local leaders in Northland are pretty happy with the attention the region is getting from the PGF.  With $130 million-worth of projects announced there, including $30 million for roading improvements, and funding for two infrastructure studies – the Fund could dramatically improve the prospect of attracting more business to the region.

The first study is examining the Upper North Island Supply Chain and has reported some early findings that highlight the potential for Northport, New Zealand’s northern-most seaport at Marsden Point, to help ease congestion at Ports of Auckland.  The second study on the North Auckland Rail line includes a strategic business case for building a spur to Northport, and signals are positive that the work will go ahead.

Chair of the Regional Transport Committee for the Northland Region, Councillor John Bain, says the impact of transport infrastructure improvements will be a game changer. “Not many would argue that, historically, Northland has had to work hard for its share of Government investment. Finally, it looks like we’re getting some traction. The local economy is going through a bit of a boom, and there’s real opportunities available for both locals and ‘imports’. We’re ready to make the most of it.”

He muses that Northland has been left behind, not just in terms of infrastructure, but also in the New Zealand mindset. “I think there might be a perception that Northland is the back of beyond – mainly a tourists’ destination. That tends to overshadow what we have on offer.  50% of New Zealand’s population lives north of Lake Taupo.  Population estimates put Auckland at 2.4 million people by 2043, with around half living north of the Waitemata Harbour.”

“The agglomeration around our bigger cities in recent years follows international trends for more people and more businesses wanting to be where the action is.  The problem is, this doesn’t work particularly well in a small country – the cost of urban land skyrockets, congestion increases, and competition amongst densely packed industries becomes fierce.  So, people are starting to branch out and examine options.”

Councillor Bain’s message to businesspeople in the cities (and probably stuck in traffic) is to ponder this: “Northland has huge tracts of available land zoned for industry and business, at prices that would make Aucklanders weep. Northland is a glorious place for business, work opportunities, and lifestyle.”

Northland Inc, the Regional Economic Development Agency, is perfectly placed to help grow and strengthen businesses in Northland. One way it does this is through its Landing Pad service. This platform has two specific functions: it acts as a ‘concierge’ – a friendly face – to investors and organisations keen to relocate to the region, and it supports, expands and furthers opportunities for existing or start-up businesses.

“Our role is not only to strengthen and grow the regional economy, but to add to its diversity as well – something that Northland is becoming increasingly recognised for,” say Vaughan Cooper, Northland Inc’s acting CEO.

One of Northland’s industries that’s experiencing solid growth is the marine sector.  Ben Haselden, Hybridisation and Electrification Manager for the locally-based but internationally known electrotechnology firm McKay, says their future is showing “lots of promise, because of the strategic work being done by key Northland businesses, like Refining NZ, Marsden Maritime Holdings, Northport, and tourism operators, which are primarily marine-based.”

“The marine sector is going through a step-change at the moment, in the sense that it’s becoming highly innovative compared to the past.  This is creating a renaissance for the industry in the Whangarei District.  Its proximity to Auckland and having a major seaport here are big strategic benefits for McKay.”

Other benefits, as Ben sees things, are that lease costs are a lot cheaper than Auckland, and there’s access to skilled labour.  “There’s an impression that there’s a skills shortage in Northland, and that’s true amongst the younger generation.  But on the other hand, there’s a good number of people in the middle generation who are highly skilled.

“Often, they’re returning Northlanders who want to focus on their family, the Northland lifestyle, and have stable employment. Quite often, they are pleasantly surprised at the competitive salaries being offered and the career opportunities they thought they’d left behind with the chance to be in some of New Zealand’s most innovative industries.”

While there’s been an influx of people, leaders say to encourage businesses to re-locate, the PGF has a role to play.  Councillor Bain thinks adding criteria to the Fund’s allocation criteria to support relocation costs would remove one of the biggest “handbrakes”.

“I know it may not be popular at a national level, but I think it would make a huge positive difference to regional development – bringing more jobs and innovative businesses – while at the same time relieving pressure in Auckland.”

Felix Richter, Chief Executive of Marsden Maritime Holdings Ltd, agrees.  “In the last few weeks, I’ve prepared three letters of support, all for businesses currently based in Auckland, who see the advantage of getting out, but one of the biggest obstacles is meeting the cost of the move. If the PGF could be used, it would be a game-changer.”  Marsden Maritime owns the industrial land behind Northport and is progressively developing an industrial park there.

Some have already made the jump.  One is Extrutec Ltd, a polymer extrusion manufacturer that re-located from Auckland to Marsden Point three years ago, and which took out the Innovation Award in the 2018 Westpac Northland Business Excellence Awards for its biodegradable twine for the agricultural industry, replacing the need for plastic twine that ends up in landfills.

“With all the current expansion, and with Northport being more focussed on container freight, we consider Marsden Point and the port important parts of our future plans for growth, for importing raw materials, manufacturing nearby, and exporting finished product overseas.”  Extrutec currently exports to Australia and the Pacific Islands. 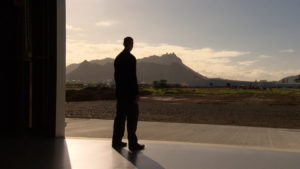 Joe (left)still resides near Auckland and says the commute between his home and the Marsden Point factory takes just over an hour, “That’s no different to what I was doing in Auckland, but now I’m not sitting stuck in traffic.”

It needs to be said, though, that despite the benefits of the PGF, infrastructure developments, and the commitment of large Northland businesses to plan aggressively for growth, there is still work to be done to bring the region up to par.  In addition to enabling applications for urban business to meet the costs of relocation to provincial centres, there are calls to widen the PGF criteria further – or at very least, tailor these to the needs of each region.

Joe and Ben agree that a skills shortage amongst the Northland’s younger generation needs to be addressed.  Says Joe, “The Government could be doing more to encourage technical learning within the region.  Growing young people’s skills and ensuring they have jobs here, keeps them here.  At the moment we have a brain drain because youth are leaving to be educated, and don’t come back.”

Ben, too, would like to see greater availability of cadetships and apprenticeships.  “We need to start nurturing a bigger ecosystem of established, experienced companies who take on school leavers and help build the next generation of innovators.”

And Joe thinks the Government’s emphasis on high-tech business and the primary industries shouldn’t be at the expense of SMEs in manufacturing.  “NZ manufacturing has huge potential to deliver economic benefits given the right Government support – like accelerating depreciation on specialist equipment, funding support for lease costs, and facilitating collaboration between manufacturing and academia.”

Councillor Bain acknowledges there is still room for improvement.  “But the PGF, the abundance of industrial land, and local enthusiasm for growth, means Northland is emerging as a viable alternative.  There are agencies available to help – the Chamber of Commerce, Northland Inc, for example – ready to help ease the introduction of new business.  The wise people will be the early adopters!”

Northland lifestyle a big plus added by doug on July 2, 2019
View all posts by doug →