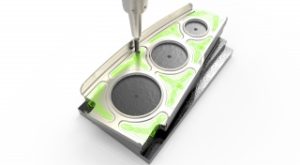 Following the introduction of the Vortex high-efficiency area-clearance strategy in PowerMILL 2014 last September, Delcam’s new roughing strategy has now been added to the FeatureCAM, PartMaker and Delcam for SolidWorks CAM systems.

Delcam will be appearing on Stand 3075 at EMEX 2014 with its new Vortex range.

A video showing the benefits of using Vortex in FeatureCAM to program a HAAS machine can be seen atÊwww.delcam.tv/vortexhaas

Vortex gives the fastest safe metal removal from solid carbide tooling, in particular designs that give deeper cuts by using the full flute length as the cutting surface. It can be used for two- and three-axis roughing, three-plus-two-axis area clearance and for rest machining. It gives benefits when machining all types of materials, including titanium, tool steel and alloys such as Inconel.

Vortex produces toolpaths with a controlled engagement angle and so maintains the optimum cutting conditions for the toolpath that would normally be possible only for the straight-line moves. As a result, higher feed rates are possible so the cutting time will be shorter, while cutting will be undertaken at a more consistent volume-removal rate and at a constant feedrate, so protecting the machine.

The constant feedrate achieved with Vortex is a fundamental difference from other high-speed roughing techniques. Trials at Delcam have shown that this approach is more reliable as it can often be difficult to predict exactly how machine tools will react to changing feedrates.

Vortex also uses a minimum radius parameter, calculated to make sure that the machine tool can keep up the cutting feedrate in corners and, more generally, for any non-straight part of the toolpath. This makes the cutting process more predictable since the machine should run at the programmed feedrate throughout and not slow down in the way that it could on other kinds of area-clearance toolpath.

The control of the engagement angle that is possible with the Vortex strategy also makes the performance of the tool more predictable because it is operating closer to the optimum cutting conditions associated with a straight-line cut. This means that it is easier to adjust the feeds and speeds being used to machine a particular part such that a tool can be relied on to cut, for example, ten components before it needs to be changed. A tool change can then be added into the program where appropriate so that lights-out machining can be undertaken safely and consistently on a long series of parts, either overnight or across a weekend.

The extent to which time can be saved with Vortex will vary depending on a number of factors, including the material and shape being cut, and the machine tool and cutting tools being used. A series of trials run by Delcam on different machine tools within its Advanced Manufacturing Facility has shown that a time saving of at least 40% is quite achievable, with the biggest percentage savings being found when cutting a sample part in tool steel.Ê The cycle time for the part was reduced from 121 minutes to 34 minutes, a reduction of 71%.

Other examples included a reduction of 67% when cutting a number of pockets in a stainless steel part, a 63% time saving on a titanium part and a 58% saving when cutting an aluminium component.

The exact effect on tool life from using the Vortex strategy also varies from project to project. In one example, where 2,000 stainless steel components were being produced monthly, the number of tools being used was reduced from 300 to 100 each month. The replacement tools were more expensive but the overall costs were still reduced by around 50%.