Why it pays to join the circular economy

By doug on November 14, 2014Comments Off on Why it pays to join the circular economy

We all know that the current linear economic model is not sustainable. Materials are extracted, manufactured into products and then discarded into landfill – it’s a system that wastes valuable resources, causes environmental damage and will make it near impossible to satisfy the demands of the 3 billion new consumers in developing nations, who are expected to join the middle class by 2030.
The concept of the circular economy is about decoupling growth from resource consumption – and maximising the positive environmental, economic and social effects.

It’s about designing products so that they are easier to reuse or recycle, like Timberland’s Earthkeeper shoes. It’s about making sure that every product ingredient is biodegradable or fully recyclable, like the chemicals company that has replaced fossil-fuel feedstocks in their production methods.

The circular economy is about new business models that have shifted from selling products to selling services, such as the tyre company that offers a per-km tyre-leasing service. It is about eliminating waste from production, and making sure any waste is recovered as a valuable resource, whether it’s heat, slurry, nutrients, organic material, metal, salt – whatever.

It’s about engaging your customers throughout the life cycle of the product, instead of the few minutes during which they make a purchase; and, ultimately, it’s about gaining competitive advantage. 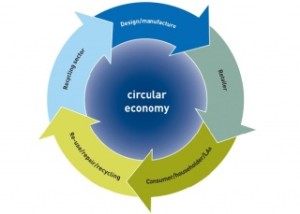 The scale of the competitive advantage is startling. Against a backdrop of resource prices that have more than doubled over the past 10-12 years, erasing the commodity-price decline of the 20th century, our material-saving potential is expected to reach around $1 trillion per year by 2025.
The opportunity presented by the circular economy in Europe and the US pales into insignificance compared with what is at stake in developing nations, and only decoupling growth from resource consumption will allow developing countries to enjoy the same products, services and standards of living that we have begun to take for granted in the industrialised world.

There are those already catching on to this competitive advantage. Take, for example, anyone involved in the World Economic Forum and Young Global Leader’s first annualCircular Economy Awards, which recognises ideas leading the transformation towards a truly restorative industrial economy.

Examples also abound in China. The nation is leading the developing world in implementing a circular economic model, which it formally adopted in 2002.

It is seen as a way for China to avoid the sort of environmental damage that typically takes place as economies industrialise. The China Association of Circular Economy claims that the country’s circular economy grew by 15% annually between 2006 and 2010, and projects it will almost double from 1 trillian yuan ($164 billion) in 2010 to 1.8 trillion yuan ($295 billion) in 2015.

Research shows that in the coming decade, between 6 and 7 million jobs will be created in China.

Why it pays to join the circular economy added by doug on November 14, 2014
View all posts by doug →