Incredible result was the right one

By doug on May 19, 2019Comments Off on Incredible result was the right one

Australia has voted in a resounding way to maintain the status quo, rejecting the Labor Party’s push to create a government
with a trade union heart.

From Moggs Creek to Burnie, Port Hedland to Coffs Harbour the country chose a steady, progressive LNP as against Labor, which was riding on the legend of the Silver Bodgie, hoping this would get them over the line first.

Throughout the campaign Scott Morrison produced a herculian effort – mainly alone – to drive the LNP message to Australians.
He was focussed and considered and wasn’t easily riled. Bill Shorten on the other hand often came across as a trade union official, keen to sign up members.

Bill Shorten has resigned as leader and it is hard to see who will replace him and be a charismatic force to bring about change in public opinion.

When you consider the key issues that worried Australians – health care, housing, the Adani mine, climate change, care of the over 60’s, education and employment, none of this could be placed at the feet of the LNP as Labour tried so hard to do. 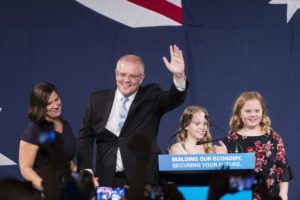 Because these are worldwide issues, issues that all countries are constantly battling with. They were not issues that LNP or Scott Morrison were
responsible for alone. The Adani Mine and climate change are huge challenges for the Morrison government. Mining provides lots of employment
opportunities for Australians.

We live in times where full employment is the ideal. Australia’s climbed to 5% unemployment just before the election. More so if not for mining.

Sometimes the ideal is not the reality.

And a final thought: the proud history of the Australian Liberal and National Parties with their support and backing were never going to tolerate a trade union reign of power. Some of them may be the top end of town – but that is what success means in a thriving economy, doesn’t it. Besides, I would have thought that some of Labor’s supporters were from the top end of town too?

Incredible result was the right one added by doug on May 19, 2019
View all posts by doug →