Recycling breakthrough set to save environment from toxic acid waste

By doug on February 21, 2020Comments Off on Recycling breakthrough set to save environment from toxic acid waste

Zincovery aims to offer an innovative recycling service for acid waste at a lower cost than what businesses would pay to dispose of it.

An industrial prototype to recycle acid waste from Christchurch’s galvanised steel industries is just the beginning for researchers at the University of Canterbury who have a global vision for their eco innovation. Called Zincovery, their exciting project is a finalist for Callaghan Innovation’s prestigious C-Prize. 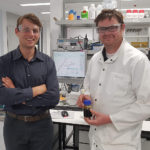 Zincovery is the brainchild of UC Associate Professor of Engineering Dr Aaron Marshall and Chemical and UC Process Engineering Master’s student Jonathan Ring, whose prototype process is poised to make a big impact as a new low-cost industrial recycling technology.

Their solution for recycling spent acid and recovering pure zinc is a true leap forward towards a cleaner global future for industries reliant on galvanising, a process that involves applying a protective zinc coating to steel. They have their sights set on tackling the hundreds and thousands of tonnes of zinc and acid released into landfill and wastewater every year through the steel galvanising process.

Using their industrial prototype, currently under construction, Zincovery aims to offer an innovative recycling service for acid waste at a lower cost than what businesses would pay to dispose of it. Their prototype will be capable of recycling 15 per cent of the acid waste produced by Christchurch’s galvanised steel industry.

Next year, the goal is to build a commercial treatment plant for New Zealand. Zincovery’s long term ambition is to expand into international markets. If successful, potential returns could run into hundreds of millions of dollars with a significant portion of that directed back to New Zealand.

The 10 finalists, selected from 140 entries from across New Zealand, were each awarded $10,000 to support their project, along with business mentoring. The grand prize winner will be announced in June.

Dr Marshall first became aware of the need for new low cost zinc recycling technology after being approached by a local galvaniser, who was frustrated with high disposal costs and a lack of good recycling alternatives. After seeing the potential value for recycled zinc dissolved in waste acid, he invited Master’s student Jonathan Ring to join him in researching the opportunity.

“After a year in the lab we had a breakthrough: we have developed a low-cost recovery method for pure zinc. We’re very excited about the environmental and commercial potential of this project,” says Dr Marshall.

Until now, there have been few affordable recycling options for the galvanised steel industry as the existing technologies are expensive and recovering zinc has simply not been economic.

Jonathan Ring is also working on the business side of Zincovery as part of the UC Centre for Entrepreneurship Summer Startup Programme. The programme gives students the opportunity to fast-track their commercial or social enterprise under the guidance of local business mentors.

Recycling breakthrough set to save environment from toxic acid waste added by doug on February 21, 2020
View all posts by doug →